Nobel laureate, Prof. Wole Soyinka, on Tuesday gave a chilling account of how he was diagnosed last December of prostate cancer and got cured of it in October 2014.

Soyinka disclosed this on Tuesday at the June 12 Cultural Centre, Kuto, Abeokuta, while addressing journalists at a press conference tagged ‘Beyond Ebola and Beyond reign of the Silent Killer,’ which was meant to create awareness on cancer.

Though he neither gave details of where and how he got cured, he described the ailment as a ‘nuisance which must be got rid of.’

The literary icon said having got cured of the disease, he decided to make his health status public so as to encourage cancer victims to go for medical treatment.

Soyinka also noted that cancer should not be regarded as a death sentence.

He said, “In December last year, I discovered that I had cancer, we were making sure that, that was what it was before going for other tests. And once it was established that I did have cancer and I was sure because in my family we had an uncle, at the time he died, we did not have all the sophisticated ways of knowing how he died.

“What killed him was attributed to a lot of things. From the little things I know about cancer, I came to a conclusion that he died of cancer, maybe we have it in our family.”

Soyinka said as a private person he would have been silent on it, but he decided to make it public being a member of the Africa Cancer Centre.

He said, “For me, it is not a decision that I am happy with, but I felt I have an obligation being a member of the Africa Cancer Centre and also having donated during the festival of fund raising for cancer, I felt I owe people an obligation to make it known and also to demystify cancer, many people feel it’s death sentence. Family, friends and colleagues begin to look at you as if you are a ghost, just because you have cancer.”

Encouraging cancer patients, Soyinka said that they should know that cancer affliction should not be seen as a death sentence.

“No, cancer is not a death sentence, it is curable and I have undergone treatment and I am able to tell you that I even have a medal to show for it,” he said.

Soyinka, who said he was okay, appealed to Nigerians who have his kind of case to go for test within the available facilities in the country.

But he urged the Federal Government to treat the issue of cancer seriously by releasing the fund already budgeted for cancer treatment and construction of research centres in the country.

He said, “The important thing is that we have enough funds to build all the necessary cancer centres including research centres that this nation requires, though some of these centres are capital intensive.”

He added that funding should not be a challenge for the creation of cancer centres because money for it had been budgeted for during the late President Umaru Yar’adua’s administration.

He said, “One of the major reasons why I decided that I would come and make this personal appeal is that I happen to know that certain amount of money had been approved for cancer centre under the late President Umaru Yar’adua and I want to make a personal appeal that this money be released because not all of us can gallivant a round the world where we can stop over and have the necessary treatment.

“At least, we can have diagnostic centres everywhere where elementary treatment can be given to patients.”

He explained that there were many ways of treating cancer just like there were different types of cancer.

Soyinka, however, advised the people to watch what they eat, as according to him, “diet forms an important part of cancer.”

Speaking on his experience while undergoing treatment for cancer, Soyinka said the most difficult part of the process was the diet that was prescribed for him.

He said, “I have to drink a lot of water. The most painful part of it, as many of you know, is that water and I are not very good friends. I don’t enjoy drinking water.”

Asked how he felt when he was battling with prostate cancer, he said, “To tell you the truth, I do not recollect what I felt. What a nuisance, we deal with nuisances! Whatever it takes, just look at the best way of getting rid of this unwanted squatter in our body.” 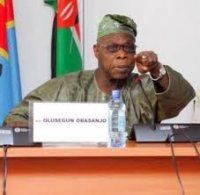